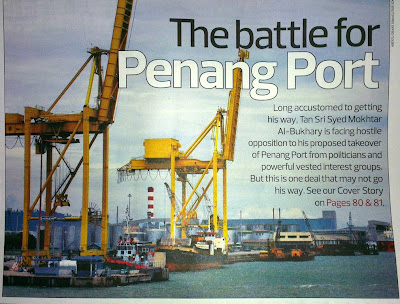 By Michael J Hershman (Huff Post)
Change, relatively speaking, came quickly to the Arab Spring countries. Some leaders fled, others stepped down, and one even fought to the death. But behind every popular movement calling for democratic change was an inherent desire for something more: to stop a system and culture ripe with corruption. As the executive director of the United Nations Office on Drugs and Crime put it, the Arab Spring was an "emphatic rejection of corruption."
Yet in mid-2012, with the newly-installed democratic processes flailing, these anti-corruption objectives seem far out of reach. If the Arab Spring countries and other high-risk nations are serious about confronting their corruption culture, they should look to the innovative model instituted by an unlikely actor: Malaysia.
All too often, anti-corruption efforts are incomplete; they pass laws without sufficient enforcement mechanisms, or they maintain a myopic shortsightedness by failing to create a system that will last by appealing to everyone's self-interest.
Malaysia's comprehensive anti-corruption system, a core component of the Prime Minister Najib bin Tun Abdul Razak's governmental and economic reform program, addresses these common failures a unique way by establishing a permanent agency at the center. Using the structure of Hong Kong's anti-corruption agency as a foundation, the independent Malaysian Anti-Corruption Agency (MACC) is part of the Government Transformation Program, meaning that both its achievements and shortcomings are discussed at length in the Annual Report issued on the reform progress.  Since its inception in 2008, the MACC has made outstanding progress by focusing on a three-pillar approach that institutes reform in government, civil society, and business. All are bound by recognizing the powerful appeal of money in inducing corruption -- either when corporate interests deem it acceptable to leverage money behind the scenes to get what they want, or when the government culture allows politicians to enrich themselves while abusing the public trust. A truly effective anti-corruption system must have stakeholders from all ends of society working in concert.
To this end, the Malaysian government has worked hard to include the business community and civil society in its anti-corruption efforts. Both private and government-linked companies are encouraged to publicly sign an Integrity Pledge or engage in a contractually-bound Integrity Pact. Unlike empty pledges used in some other countries, Malaysia Integrity Pledge has real implications for both the country and company alike: In return for cooperating with an outside team that may includes officials from Transparency International, the Auditor General's office, the Finance Ministry, or other stakeholders to verify their progress, companies receive a competitive advantage, such as being shortlisted during competitive bidding processes. The even more rigorous Integrity Pact, which the government tested out last year during the bidding process for Malaysia's Mass Rapid Transit, is used as entry requirement for companies wishing to bid for a given government project.  The voluntary process emphasizes the use of built-in incentives for compliance over exclusive penalties for enforcement. Just as political actors shouldn't be forced to commit political suicide to raise the flag of fighting corruption, so should businesses shouldn't need to feel like they are sacrificing their competitive advantage. Implementing internal compliance policies within the larger anti-corruption framework should be in each stakeholder's self-interest. With dozens of companies voluntarily making the Integrity Pledge to date, the success of this approach is evident. Another key component of the Malaysian Anti-Corruption strategy is judicial reform and transparency.
In the old Malaysia, corruption cases took years to reach the courts, rendering many of the complaints relatively meaningless. With the creation of anti-corruption courts in recent years, and a mandate that all corruption cases be adjudicated within 12 months, the judicial enforcement mechanism was completely flipped on its head. Another success has been the increasing use of electronic data-based procurement processes, facilitating complete transparency, accountability, and auditing capabilities. In short, once a government removes much of the discretion from the procurement process and bases most decisions on a competitive process that is fully transparent, there will necessarily be fewer opportunities for corruption.
Further, the state-of-the-art Malaysian Anti-Corruption Academy is shifting the focus not just on enforcement and compliance -- voluntary or otherwise -- but on prevention education that includes public service announcements, visits to schools and anti-corruption training for laws enforcement officials in Malaysia as well as throughout the region.  For all the ingenuity and hard work, Malaysia's anti-corruption system -- and the MACC specifically -- are still works-in-progress. Since 2008, the government has already revised the law to address some of the shortcomings, installing a compliance unit, speeding up the trial process, and adding a new clause to the MACC Act that strengthens the roles of the five independent bodies holding the MACC accountable.  There are still imperfections that the government will need to address. Some of these issues, like the "big fish" problem (the public's desire for a quick conviction of a major political player), are political realities; they reflect a public desire to have symbolic victories that are satisfying but do not guarantee the level of comprehensive reform necessary for the system's long-term sustainability. Other issues -- like unregulated campaign finance, the ethnic preference system, and insufficient freedom of information laws -- are challenges outside of the realm of the MACC that will need to be addressed with the ongoing Economic and Government Transformation Program.  Clear goals and commitments to anti-corruption have been demonstrated in Prime Minister Najib's Economic and Government Transformation Programs. They will and should continue in the months and years ahead, regardless of who leads the Malaysian government.
High risk countries offer the most challenging environment for large-scale, comprehensive reform. But as the Arab Spring showed, when these problems of corruption have appeared and have been allowed to fester, a popular movement will demand action. It would behoove these leaders to take a look at the Malaysian model instead.
at 11:15 No comments:

AMBIGA, YOURE NOT SUU KYI

To Ambiga, please stop being melodramatic. No need to beg for sympathy either.Why? Nobody is sending you to jail. This is Malaysia, a free country with its positive limitations. Do not compare Malaysia with Myanmar or equate yourself to Aung San Suu Kyi.Wake up! You are not a freedom fighter like Suu Kyi. She (Suu Kyi) fought for a democratic Myanmar, just like what Malaysia and many countries are practicing. There was no democracy in Myanmar as they were under the junta rule.You are propagating absolute freedom, free sex and a corrupt society. For heaven sake, this is not a cowboy country, a country where everybody can screw each other, insult the religions and mock the races.What kind of a freedom do you want? Do you and your family practice absolute freedom of speech in the sense that you can use profanity words against your parents, your neighbors and your friends; look down at their skin color and encourage them to have bastards and enjoy same sex intercourse?My God! Which religion allows that, would you please tell me! What kind of freedom could that be?You said Bersih is not responsible for the fracas during April 28 rally. Why can't you take full responsibility for that since you were the one who called for support and participation. However, you failed to control those people, your own supporters!Are you aware of what is taking place in Myanmar now? Would you, personally, wish for Malaysia to plunge into such a situation if absolute freedom is our practice here? Where would you go or hide if such a violent 'revolution' come knocking at your door?I like freedom too, everybody else would love it too. But I would not allow my daughter and son to come home with their out-of-wedlock babies. I don't know if you like it but as a human, I will deplore it!So, you want to change the government. Fine, but do it in a democratic way, via election. If you don't trust the electoral system, I better recommend the prime minister to defer the national poll or put the country under 'mageran' like we used to have once. Until you and your friends are satisfied with the conduct of the poll, we better not have an election after all!You are a Malaysian, born, brought up, studied and earn a living here. I hope you don't regret being a Malaysian because this nation is totally different from others for its multi-religion and multi-racial content. Myanmar is not even close to us, and so are the United States, Saudi Arabia, Syria, India, China or Korea.We have the Opposition at the Parliament and I believe the government does listen to their suggestion and complaints. Each and every Malaysian is represented and their voice is well-heard by those administering the government.However, changes do not come with a blink. It takes time and crucial consideration. If you think you can change the government by force, what makes you so sure that the government you support can fend itself from a la Bersih bandwagon?Since when did we have a constructive Opposition in the Parliament? If the Opposition's role is to object everything, then they have failed the country and their electorates.And what make you to proclaim that the 20,000 or 30,000 people who joined Bersih were actually representing each and every Malaysian? What kind of people and mentality that you had incited to join the rally?I wonder if your team successfully forms a government after the next national poll, what kind of action would you take to confront such a rally. I wonder how would you tell the rakyat if your human rights tools lead to moral decay and social values' deterioration. Perhaps you would tell them that its their rights to do anything they wish!So, forget your dream of becoming another Suu Kyi or Nelson Mandela. Stop drawing smpathy from the foreign media and foreign forces. If you get the chance to rule this country and introduce what you have been propagating, I don't think you would be ready to face the masses!