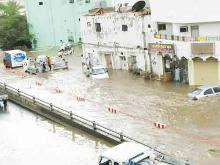 JEDDAH – Described as the worst in 27 years, flooding killed at least 44 people in Jeddah Wednesday after a heavy downpour, a Civil Defense statement said early Thursday.

The downpour paralyzed the entire city, just two days ahead of the Eid holidays, leaving the city’s shaky infrastructure crippled, perhaps for years to come.

The Jamia (University) Bridge on the Haramain Highway, in eastern Jeddah, partially collapsed and was closed to traffic. A few old houses in the Jamia District collapsed as well.

Motorists on the Haramain Highway were stranded for hours after the heavy downpour. The eastern districts of Jeddah including Abruq Al-Raghamah, Al-Ajawid, Al-Samir, and Al-Tawfiq were completely cut off from the rest of the city. The downpour continued until late afternoon.

Part of the highway which links King Abdul Aziz International Airport (KAAIA) and Makkah caved in due to heavy floods coming from scattered valleys east of Jeddah. Traffic coming from the south on the highway was completely halted, while the flow of traffic from the airport to the south was crippled just a few meters from the King Abdullah Bridge, about one km from the partially collapsed bridge. The storm also left thousands of pilgrims stranded in buses headed from Jeddah to Makkah for the first full day of the Haj. The Jeddah-Makkah Highway was closed to traffic as accidents were reported on the 80-km stretch. “We’re stuck because of the water and rain. God willing, everything will be okay,” Hakan, a Turkish pilgrim from Istanbul told Reuters as he waited for a bus to Makkah.

Houses in the eastern districts were inundated with water, forcing families to take refuge in upper floors and on roofs. Residents, who have incurred huge property damages, said they called the Civil Defense at 993 and the police at 999 for rescue, but only got busy signals.

A mother, with her children, was stranded on the roof of their house for the entire day in Abruq Al-Raghamah. “I tried to call the Civil Defense to come to our rescue, but the signal was always busy,” said Brigitte by phone. “The power was cut at around 11:00 A.M.,” she said.

Brief power outage hit most of the Western Province, including Makkah, Madina, and Jeddah, the Saudi Electricity Company (SEC) said. “Some flood-hit areas in Jeddah are still in the dark as it has been hard to reach locations of power transformers because of heavily-flooded roads,” Eng. Abdulaziz Aal Al-Sheikh, chairman of the SEC in the Western Province, told SPA.

In one part of Jeddah, a bus could be seen submerged under several meters of water in an underpass. A witness told AFP by phone he had seen several bodies beside another bus that overturned in the storm.

The Civil Defense deployed 120 rescue teams across the city, including eight in Jeddah’s historic downtown area, said Col. Muhammad Al-Qarni, acting chief of the Jeddah Civil Defense Department. Main intersections of the city were heavily-flooded with broken traffic lights, creating the largest traffic jams the city has seen in years.

The Jeddah Mayoralty put 130 water tanks into service to pump the water out of the streets with the help of over 1,000 workers, said Faisal Al-Shawli, director of Roads at Jeddah Mayoralty. The rainwater project is 70 percent complete, which has reduced the water gathering areas from 500 to 100. Some heavily-looded remote villages on the coast north of Jeddah were evacuated. – SG with reports from Abdulaziz Ghazawi from Okaz and Agencies
at 21:17