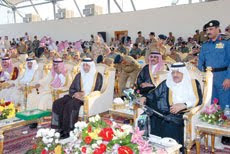 ARAFAT – Prince Naif Bin Abdul Aziz, Second Deputy Premier and Minister of Interior and Chairman of Supreme Haj Committee, warned Sunday against any attempts to disrupt the security and peace of this year’s Haj.

“We will not tolerate any violation of the Haj security from any individual, group, or any other side,” Prince Naif said during a press conference in Arafat, 15 km outside of Makkah, following his inspection of the holy sites.

He hoped that the government would not “be obliged to resort to force” to maintain security during the Haj.

When asked about recent calls by Iranian figures for politicizing the Haj, Prince Naif said, “We have heard contradictory statements from the brothers in Iran, but the latest were favorable. The Iranian officials have arrived and we hope the brothers will just focus on their Haj rituals,” as ordained by Islam.

“The Kingdom will not allow anything to be done in the Haj other than what Allah has made permissible,” Prince Naif said.

“We wouldn’t accept for any pilgrim to be harmed,” he said.

Answering a question on the current military operations against infiltrator attacks along the border with Yemen, Prince Naif did not rule out cooperation between infiltrators and Al-Qaeda group in Yemen.

The Kingdom has not made any communication with any side linked to armed infiltrators and “We are only communicating with the Yemeni government,” he said. Thousands of infiltrators who cross the Kingdom’s borders every year, especially during the Haj season, are usually arrested and sent back home, he said.

Prince Naif, who was accompanied by Prince Khaled Al-Faisal, Emir of Makkah, and Prince Muhammad Bin Naif, Assistant Minister of Interior for Security Affairs, inspected security preparations of the Haj and new Haj projects including the SR4.2 billion Jamarat Bridge.

Forces tasked with the Haj security marched in a parade featuring military displays before Prince Naif.

The annual parade of the Haj force has always been a military enterprise where all government security departments take part. The 100,000-member strong Haj force will work around-the- clock to ensure a safe and smooth Haj as planned, said Gen. Saeed Al-Qahtani, Chief of General Security.

The government has completed important Haj projects including the 5-floor Jamarat Bridge to ease congestion when performing the stoning ritual and the expansion of the Mas’a inside the Grand Mosque, he said. Other vital Haj projects including the monorail and the expansion of the northern plaza of the Grand Mosque are progressing as planned, Al-Qahtani added. – SAUDI GAZETTE.
at 15:08