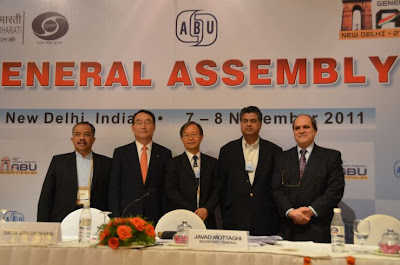 INDIA : The ABU's 48th General Assembly and associated meetings ended in New Delhi today with the announcement of the election of its new President.

The CEO and President of KBS-Korea Dr Kim In-Kyu was unanimously elected the union's President this evening. His term begins with immediate effect and will last until the end of 2014.

Dr Kim assumes the position after serving as ABU Vice-President since the beginning of this year. Prior to Dr Kim's election, Datuk Ibrahim Yahaya, Media and Broadcast Advisor to Malaysia's Minister of Information, Communication and Culture, was the Acting President. Datuk Ibrahim now resumes his position as ABU Vice-President until the end of 2012.

Naoji Ono, Executive Vice-President of NHK-Japan was unanimously elected ABU Vice-President to take over the position vacated by Dr Kim. His term begins with immediate effect and will last until the end of 2014.

IRIB-Iran was elected to the ABU Administrative Council while MNB-Mongolia and RTPRC-China were re-elected for a three-year term.

The General Assembly concluded with a reception hosted by NHK-Japan. The two-day conference which ended today was preceded by five days of meetings of the ABU Programme Committee, Technical Committee and Sports Group, among others.